A little bit of context

On December 30th 2007, when the presidential election results were made public there was unprecedented outrage leading to Post Election Violence or PEV across Kenya. For around two weeks the violence continued, leading to the displacement of many, death and catastrophic destruction of property. One organisation reported there were 663,921 Internally Displaced Persons (IDPs) in Kenya as a result of the PEV. Around half of these fled to pre-existing communities while the others headed to camps for refuge. 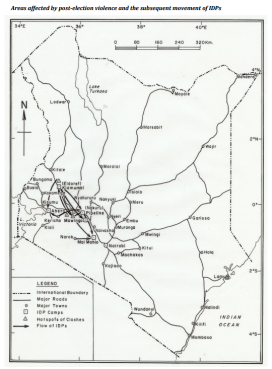 It’s estimated that during the two weeks of PEV nearly 80,000 houses were burned and over 1,300 people were killed. After instigating the violence the politicians formed a Government of National Unity in order to run the country peacefully. However, those in camps would not feel this supposed ‘peace’.

This video is 3 mins and gives a brief overview of the devastation of the PEV without too many graphic scenes. I am reluctant to post any other videos here as many contain images I deem to be disturbing. They are however a true representation of what these people experienced. If you are interested I recommend searching online for Kenya Post Election Violence and watching a short documentary.

Nearly 10 years on, many of the IDP camps remain, and they have become permanent communities. Some families have been offered grants and opted to remain in the camps, communally purchasing some land. Many remain in tents made from plastic sheets found in waste piles.

I visited the camp in Mai Mahiu in 2013, many of the houses were similar to those I have photographed below.

Although there is a mixture of housing styles, these sorts of camps have become a permanent, yet liminal home for many. Currently this IDP camp is home to one public school Southern Cross Academy. This school has approximately 350 students and 7 classrooms, of which I’m told one was recently built.

With the community becoming more permanent and the population inevitably growing, there is increasing need for additional learning spaces and opportunities.

My Tweets
Brooke Schnorr
the classroom and beyond

thoughts on connecting, engaging and learning

Ways to make teaching engaging & inspiring for ALL learners!

Creativity within the classroom

This Professional Learning Network will share my journey, my thoughts and my growth as a teacher in the 21st Century. Connect, collaborate and learn with me and together we can build our knowledge and understanding.